Still streaming my way through The Librarians  — in one episode the caretaker shows the librarians to the “time travel room.” One of the time machines is the TARDIS.

Had a good day today, but how could it be otherwise when it started with watching the latest launch from the Cape—one of the things I love about living in Central Florida!

Am I alone in seeing reminders of The Doctor all around? Last night I was watching a political parody by James Cordon (yes, from “The Lodger”) based on Les Miz, and one of the performers in the musical number was Matt Lucas, who played Nardole on Doctor Who.

Here’s an idea for an easy way to earn a free issue of our Club’s amazing newsletter, the Gallifrey Guardian. Send a photo and/or brief article to the editor at ceronomus@gmail.com telling how Doctor Who added to your holiday cheer. If your submission makes it in, you will receive a free email copy of the issue in which it appears. As an example, this would be mine:

I watched several of the Specials, sharing most with my grandchild,

and got a Doctor Who-themed birthday card and these presents for the holidays.

I also kept up my New Year’s Eve tradition (for a quarter of a century now) of watching the Doctor Who television movie, “The Enemy Within,” starring Paul McGann. It timed out perfectly, with the characters counting down to midnight at precisely the same time it was happening in real life.

I’ve been streaming shows lately, and a Doctor Who reference popped up in an episode of The Librarians. One of the main characters, describing a house that can travel anywhere in the world, compared it to the TARDIS.

Jodie Whitaker, talking about pandemic precautions taken during filming of Doctor Who, said:  “There’s real respect on set. Nobody’s in any way like, ‘Eurgh, this is annoying.’ Because it’s not annoying; it’s necessary and it’s fine. There’s nothing we can do except follow all the government guidelines and be as responsible as we can…none of this has taken the joy out of being back on set. It hasn’t taken away any of the fun or any of the banter. We’re still in good spirits.”

[We need more of that attitude in the world, the country, our state, the local grocery store…]

And finally, not exactly Doctor Who-related, but I know some of my fellow locals will remember fondly the Skycraft Surplus building in Winter Park. Inside were all the odd parts and bits of electronics you’d need to build your own creations, while the outside was decorated with rockets and a flying saucer. Plans have been made to replace the store with a medical office building. There is a tenuous Doctor Who fan connection—some of the bits on my TARDIS console came from Skycraft.

Here are some  photos that didn’t fit into this month’s Gallifrey Guardian. First, images of the Chibi Pin Badges from Hero Collector Eaglemoss, released for Revolution of the Daleks: 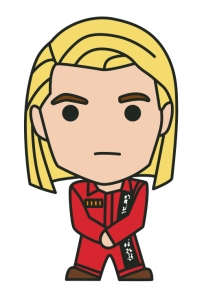 Now a few more photos to go with the Spoilers, showing some returning villains for the next Series:

If you missed the article that went with these photos, get over to our website at THE GUARDIANS OF GALLIFREY and join now for 12 issues of our FANtastic club newsletter!