Did you know more people celebrate New Year’s around the world than any other holiday? This year I suspect will be one with more people glad to see the end of the old year than ever before. (My favorite holiday card this year is one showing 2020 in a rear-view mirror.) As my co-workers toasted earlier today, “Here’s to 2020 truly being hindsight.”

But hang in there, Who fans, 2021 is coming. At 7pm our Eastern Standard Time, London will be ringing in the New Year, and you know what that means—the Doctor Who Holiday Special is on its way!

“There is your evidence,” snapped The Valeyard. “The natural cultural evolution of two planets has been altered—a clear violation of the Laws of Time!”

“Most would say the change is for the better,” replied the Lord President. “Both species are now destined to advance as a less violent civilization. There shall be no punishment; however, we shall address the discrepancy.”

Victor stared at the brilliant light captured by the camera mounted on his telescope. As a dedicated amateur astronomer he knew such things existed, but…could it be? Yes! He had just witnessed the birth of a supernova!

“Gone? How can it be gone?!” barked the frantic lab supervisor to his subordinate.

“It burned up, sir,” gulped the terrified lab assistant.

“But that star is a twin to our own sun! We’ve known for generations that its lifespan is within a century of ours, that’s why we keep it under observation. It can’t be gone!”

Once verified, the news that the planet’s sun could be dying changed everything. All over the world, wars ceased as governments worked together toward one goal—interstellar space travel. Within fifty years, the population began colonizing uninhabited planets in other solar systems.

What are you reading this for? It’s the Winter Solstice, and Jupiter and Saturn will appear closer in the sky than they have in 400 years. Get ready to skywatch!

“But why must we murder our own people to appease the gods?” argued the young king.

“Do not question the traditions of our ancestors,” replied the high priest.

“On the shortest night

of the missing moon,

the blade must fall.”

The two walked slowly toward the row of frightened victims as the familiar constellations moved in the night sky. The executioner waited for the king’s command…

It did not come.

The king whispered wonderingly, “Nergal has not appeared.” Then loudly, joyfully, “The gods have spoken—our people shall no longer be sacrificed!”

The Council watched the holographic image of the Doctor and Rose.

“I’m burning up a star for you, just to say goodbye.”

“You see,” hissed The Valeyard, “he is incorrigible! He must be stopped. To destroy a celestial body is unforgivably irresponsible.”

The Lord President raised his hand for silence and replied, “The star is in a small, distant solar system that was destined never to harbor life of any kind. No doubt The Doctor chose it for this very reason. Our temporal scientists will research the ramifications of the loss of this star before we pronounce judgement.”

In issue 558 of Doctor Who Magazine, Chris Chibnall gave an update on the production progress for Series 13 as of mid-October, before principal photography began. Chibnall wrote, “You may think we’ve been quiet during these six months. Publicly: yes, deliberately. But in private, we’ve never stopped talking and working: theorizing, modelling, planning, scheduling, rescheduling, and calling on the incredible skillsets across the team.”  He continued, “We’re lucky. BBC One and BBC Studios (and all our global partners) have been hugely supportive and clear that they want another series of Doctor Who, with as many episodes as we can produce, for when we feel we can safely and reasonably deliver it.” Chibnall said they were staying positive but being realistic about how things can be accomplished. “Previously our shoot length has produced 11 episodes in total per series. Our best estimate right now is that this time, with COVID protocols in place, the same length of shoot time will yield eight episodes.” To sum up the current filming situation, Chibnall gave a quote from Revolution of the Daleks, spoken to a character named Leo: “Embrace the uncertainty.”

Filming began on Series 13 at Roath Lock Studios on November 2, under strict industry and government guidelines to ensure the safety of cast and crew. Jamie Magnus Stone, who directed Episodes 1, 5, 9, and 10 of Series 12 will return to direct at least one filming block of Series 13, along with Director of Photography Robin Whenary. Long-time Doctor Who Producer Nikki Wilson was also mentioned on Whenary’s online CV. Sara Powell will guest star as British-Jamaican nurse and businesswoman Mary Seacole, who set up the “British Hotel” behind the lines during the Crimean War for wounded soldiers. 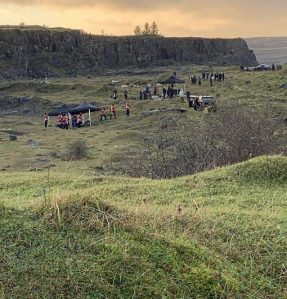 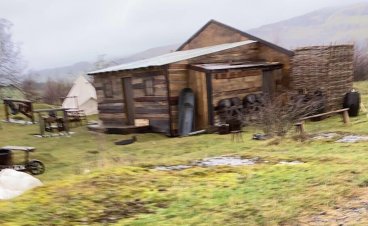 Recent Series 13 filming information and photos suggest the first block of filming includes the Crimean War episode, with Jamie Stone directing. Some photos have surfaced which show a battlefield with British uniforms from the era. Mandip Gill may have been spotted at the location. One fan who took photos posted: i didn’t take a picture of the hut or the big metal thing that’s there because people kept watching us but there’s british soldiers there and I know that there was a woman in a big skirt following behind jodie when she was running. 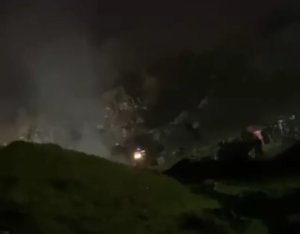 The Series 13 crew filmed at Morlais Quarry in Merthyr Tydfil in South Wales, and were photographed by a fan on November 13 and 16. Night shoots took place there as well, and a video was posted of an explosion scene featuring the TARDIS and people in period costumes. One viewer described a scene at the location as having “two others with Jodie dressed in period outfits, and had a possible Scottish accent.” Other photos show the TARDIS, some battlefield tents, a cabin and some unidentified props. One fan responding to the video mentioned seeing “the tardis crashed into a hillside.” The fan who shot the video posted: “one character was thrown to the ground due to an explosion! I also heard Jodie shout something about retreating.” A fan who took a photo at the location stated on their post that the aliens in the photo were Sontarans.

Thanks to cultbox.uk for the news!

Doctor Who fandom lost one of its own last month. Edward Foeller was a Central Florida fan known for dressing as the Fourth Doctor. I often ran into Edward on Free Comic Book Day and at local Doctor Who events. 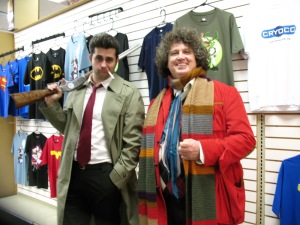 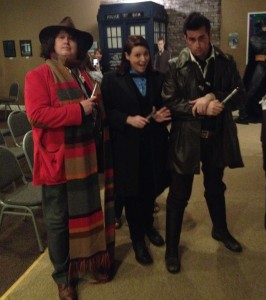 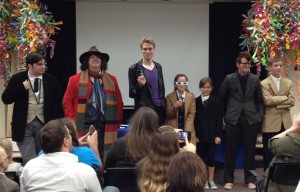 He made a great Fourth Doctor—all teeth and curls. Edward and his partner Laura came to several of our Wholiday and Anniversary Parties. 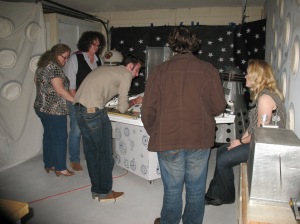 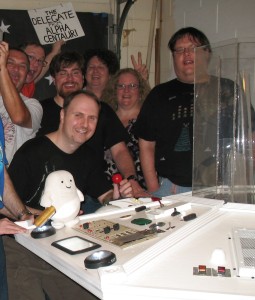 (Apologies for any difficulty in spotting Eddie in these photos–like the 4th Doctor, he was tall and therefore often in the back of pictures.)

One year, the broomstick we were using to smash the piñata broke. At our next party, Edward showed up with a sturdy staff decorated with multi-color bands to use as our new piñata stick, a testament to his generosity and creativity.

Edward was also well-known in the Orlando music scene, having performed with several local bands, but it is as the Fourth Doctor that I will remember him. Fellow Who fan Charles Martin wrote, “Eddie leaves behind his partner, Laura, his son Dylan, and a hole in the hearts of all who knew him.”

When I saw the cover of this Doctor Who Magazine, I thought at first it was a picture of the Tenth Doctor as an Auton – and then I thought “Tom Baker looks insane!” 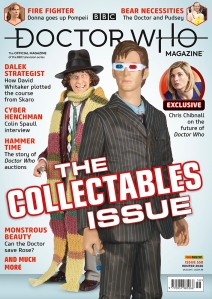 On A Late Show with Stephen Colbert, talking about Great Britain rolling out the COVID vaccine, the host mentioned all the famous old people in England, starting (of course) with the Queen, then Dumbledore, then that Doctor who’s been on TV for over 50 years…Who?…Who?!

Not Who, but still sort of genre: Later, naming new flavors of Yankee Candles for people who have no sense of smell, one of the undesirable smells was called “ComicCon Hotel Room.”